Starstruck by the Aurora Borealis 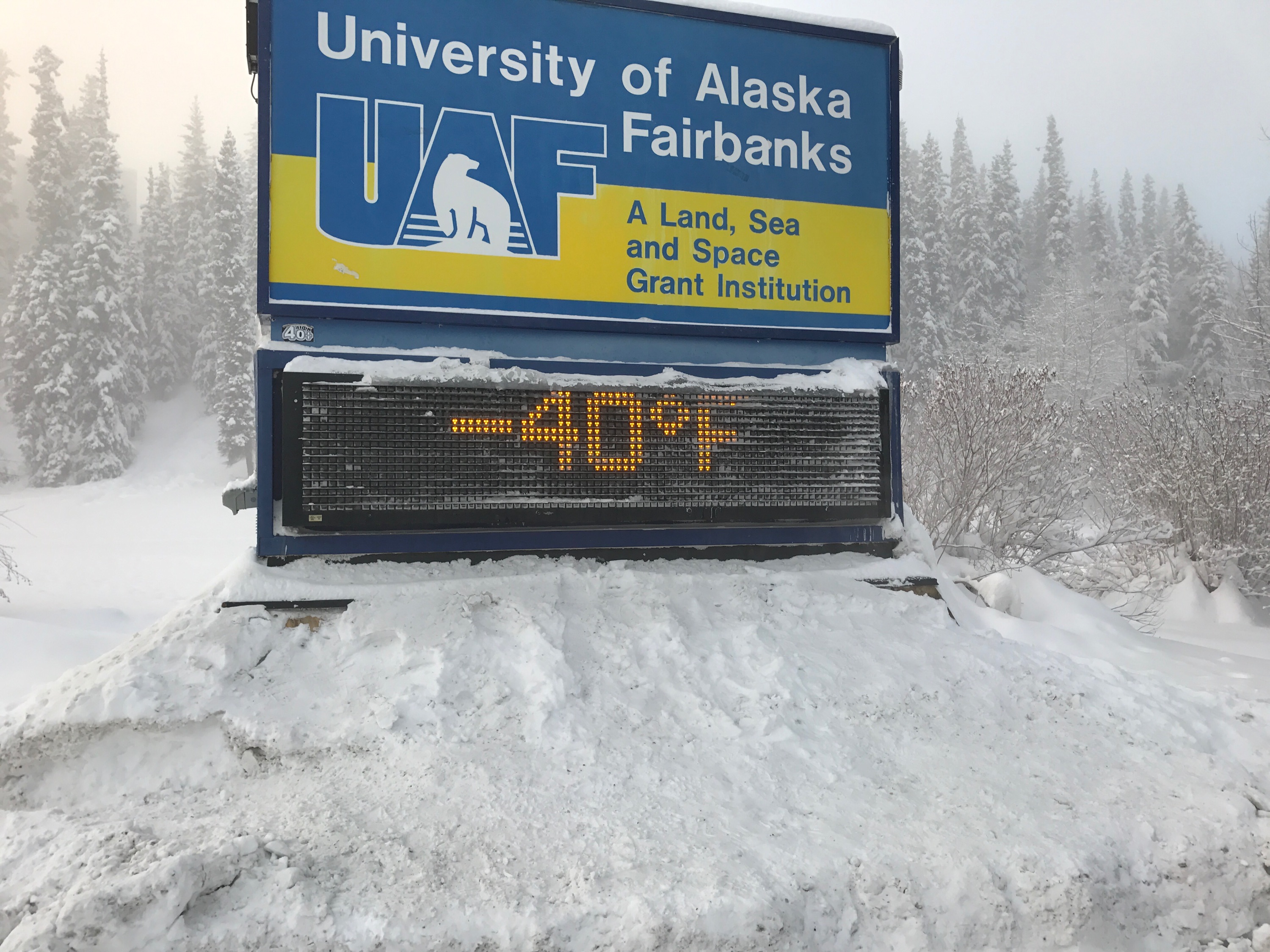 I have officially survived an entire month in Alaska! I have been at University of Alaska Fairbanks for a little over five weeks  now and I have experienced so much of it, yet at the same time, I have experienced so little. In these five weeks, I have started to feel comfortable enough to go out of my comfort zones, building relationships with people that I wouldn’t normally, simply because we are so drastically different, and going on incredible adventures with those new friends. Although adventures are fun, they all come to an end. But what’s the best way to end an adventure? Food!

There are a few places to get food on campus. One being the Wood Center Dining Hall also known as Dine 49. I have mentioned the dining hall a little in my previous blog posts (if you haven’t read those yet, I highly encourage you to do so!), but haven’t touched much on it. Dine 49 is one the place where you would go to get your typical buffet style options like a salad, pizza, or burger. It is typical college dining hall food, no five-star or anything, but I genuinely enjoy the food. I have yet to eat breakfast at Dine 49, but I have set a challenge for myself to get up early enough before class or on a weekend this semester to go check out breakfast. I have heard good things and want to find out for myself!

Something that I didn’t know about Alaska is that there is a lot of authentic Asian cuisine. There are a lot of first-generation Americans from various Asian countries that immigrated to Alaska. I have been to two of the Asian cuisine restaurants in town. One of my first nights in Fairbanks, my roommates took me to Pad Thai Restaurant. I figure that while I am in a very new place, I should try very new things. Whether that be in the things that I do or in the things that I eat, so I tried pad Thai for the first time and had this tea with milk in it that was absolutely amazing. I cannot for the life of me remember what it was though. I really liked the food and was happy with how filling it was. 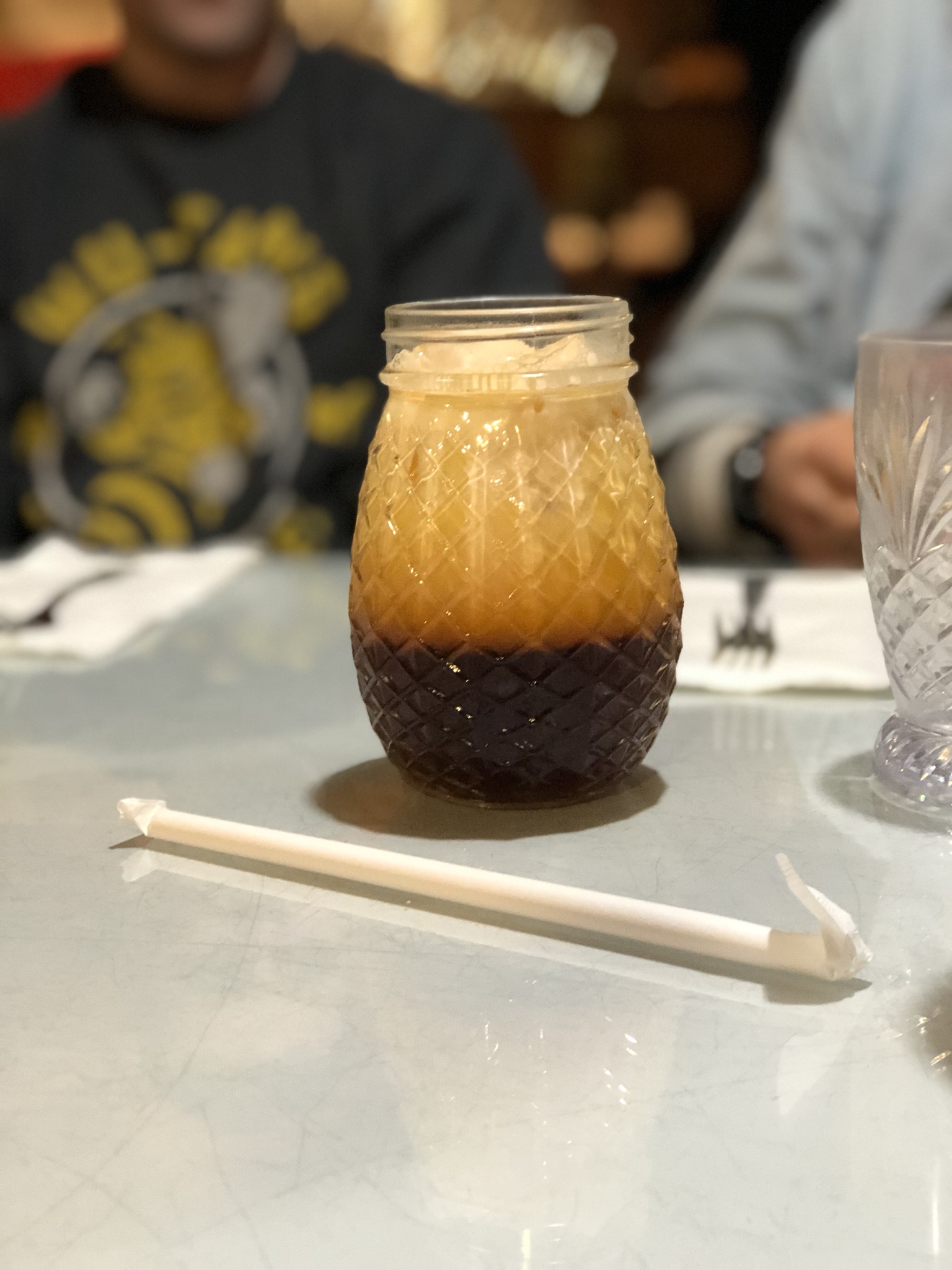 A couple of weeks ago, my friend Dallas took me to a Vietnamese restaurant called the Pho House. I hate to break it to you, but I didn’t get pho. I tried a vegetable stir fry with a squid, shrimp, and fish balls. I was craving some veggies and had never tried fish balls, so I was curious to see what they tasted like. Sure enough, they are very fishy (crazy, right?) but I enjoyed them. Both places are very popular for students at UAF; I even ran into a friend of mine at the Pho House. I am really excited to go back to both of these places with different people, while also trying new foods at some of the other Asian cuisine restaurants around Fairbanks.

Going back to what I stated before, food is great following adventures, but I want to share some of my adventures that preceded the getting of food. I saw my first real live moose this weekend! A friend of mine, Nic, and his girlfriend, came to pick me up the other night to take me on an adventure and there was a cow and her baby in the parking lot. We drove past it, making sure to keep our distance, and took some pictures. The pictures didn’t turn out super well, because it was dark, but it was still a really cool experience to have. 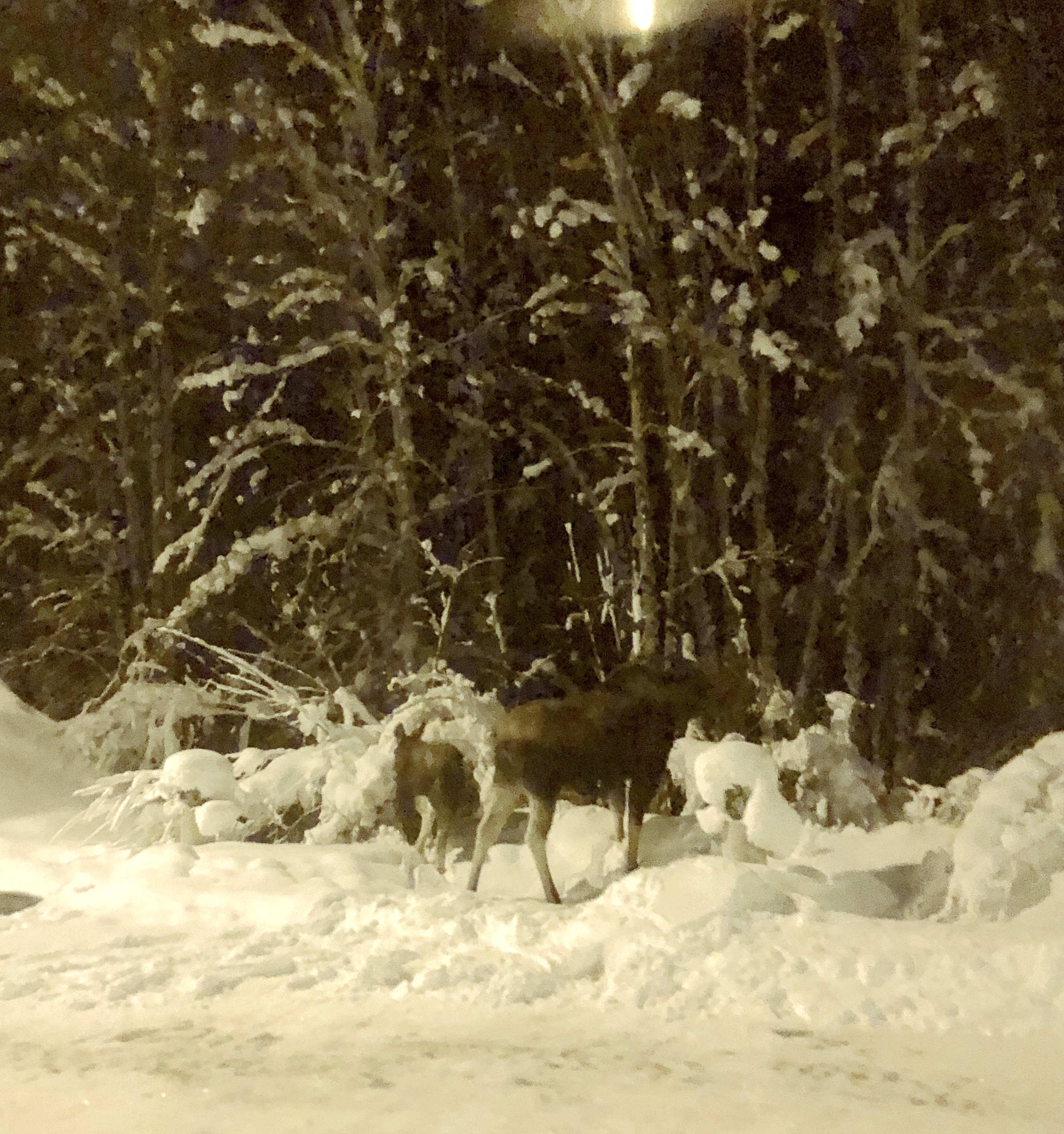 This adventure that we were about to embark on was to Ester Dome, which is a dome about twenty minutes from campus. A dome is basically a really huge hill that isn’t big enough to be a mountain, but not small enough to be a hill. We went here because it is a good spot to see the northern lights. People back home in Minnesota and people in Alaska are continually asking me if I have seen the northern lights yet since I have been here, and I continually have to tell them no, but not anymore.

We got to the top of the dome where my friend got out to check if he could see the northern lights. He came back to the car and told me to get out to come look, so I leapt out of the back seat into the frigid minus twenty-degree air to try to see them. The first thing I saw was a million stars… more stars than I have ever seen in my entire life. Growing up less than twenty miles from a big city with a lot of light pollution hides a lot of the stars, which is quite unfortunate because I am so in love with the stars. I stood there in awe for a few moments, my head tilted all the way back, staring at what seemed to be all of the stars in the sky.

Nic snapped me out of this daze telling me to come see the lights. I couldn’t see them at first because I really didn’t know what I was looking for. Once I saw them though, they started to get stronger. I was starstruck (hah get it? “Star”) by the aurora borealis. I couldn’t get any good photos of it, but even if I had, they wouldn’t do justice to what I saw. They weren’t very strong that night, but I was promised another trip soon to see the northern lights in all their glory.

With all the new adventures I have been on and all of the new foods I’ve gotten to taste, I can’t even begin to imagine what lies ahead for in the coming months. If the forthcomings are anything close to as amazing as these first five weeks have been, then I will be beyond happy with the outcome.